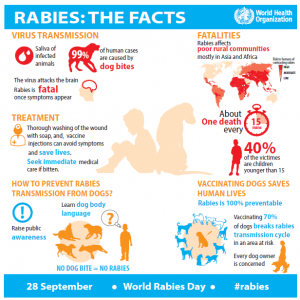 Rabies is fortunately, a rare disease in dogs in the U. S., but whether you grew up on “Old Yeller” or “Cujo” you know it is very serious. Prior to 1960, most U.S. cases were in domestic animals, but now…90% of the time rabies occurs in wildlife alone.  Modern day prophylaxis (ie:  vaccinations) has made a huge difference!  About 50,000 humans do die each year from rabies in other parts of the world, mostly Asia and Africa, however…the Center for Disease Control lists the following as rabies-free:

Rabies aﬀects the central nervous system and is classiﬁed as a virus. This virus is transmitted through the bite of a rabid mammal with an incubation period of 30 to 60 days.  Once symptoms start, a normally friendly dog may become snappy or even ferocious. Foaming at the mouth is also a classic symptom. If you suspect your dog has rabies or has been bitten by an animal, take him to the vet immediately. If you are bitten by a rabid animal (bats, skunks & other animals can carry rabies), see your physician promptly for treatment.

Like mentioned above, my first introduction to rabies was in the movie “Old Yeller,” adapted from the 1956 children’s novel involving a frontier dog that becomes infected by a wolf.  I’m not proud to say that this movie haunts me to this day, and I’m convinced I will never watch it again.  Not because of Rabies, but due to what must be done to the dog infected by it!

The rabies virus is shaped like a bullet.  A direct fluorescent antibody (DFA) test is used to examine brain tissue in animals.  A diagnosis can be made after detection of the rabies virus from any part of the affected brain, but in order to rule out rabies, the test must include tissue from at least two locations – preferably the brain stem and cerebellum.  This test requires that the animal be euthanized and that brain samples are sent to the local state or county health department for examination.   About 120,000 animals are tested for rabies each year in the United States with approximately 6% found to be rabid:   <1% in domestic animals to >10% of wildlife species.

Fortunately, for animals with a low probability of rabies such as dogs, cats, and ferrets, observation periods (aka 10 days in quarantine) is considered sufficient to rule out the risk of potential human rabies exposure.

Several tests are necessary to diagnose rabies in humans as no single test appears sufficient. Tests are performed on samples of saliva, serum, spinal fluid as well as skin biopsies of hair follicles at the nape of the neck.

Rabies has been a popular topic in entertainment as far back as 1929 in the movie, “The Lighthouse Keepers.”  Ingmar Bergman directed “Rabies” in 1958 and then there was the classic 1966 film, “Rage,” starring Glenn Ford and Stella Stevens which told the tale of a doctor in rural Mexico infected with rabies and desperately struggling to return to civilization to seek treatment. Wilbur Smith’s novel When the Lion Feeds (1964) describes in harrowing detail the events ensuing from one of the main characters’ death following a bite from a rabid jackal while “I Drink Your Blood” (1970) is a cult horror film about a gang of Satanic hippies who get infected with rabies.

David Morrell’s novel The Totem (1979) centers on a northwestern town that is terrorized by humans and animals infected with a made-up version of the rabies virus, which does not kill but rather affects the mind and physiology.  This brought about much speculation about victims of this virus being the original werewolves!  In 1981 (and then on film in 1983) Stephen King gave us “Cujo” in which a mother and son are terrorized by a rabid St. Bernard.

Not to be left out, television’s “1,000 Ways to Die” boasts of an episode about a taxidermist who contracts the disease from an infected squirrel while “Beavis” gets bitten by a rabid dog and chews antacid tablets to simulate foaming at the mouth. The topic has also been covered in “Criminal Minds,” “CSI,” “Dr. Quinn:  Medicine Woman” and others as well as in music (“Rabies,” 1989, Skinny Puppy and “Sunset Babies (All Got Rabies)” by Alice Cooper, 2005)

No matter how great of a topic it is to scare and entertain, precaution is a must!  The rabies virus infects the central nervous system, ultimately causing disease in the brain and death. The first symptoms may be very similar to the flu including general weakness or discomfort, fever, or headache which may last for days. Ann infected person may also notice discomfort or a prickling sensation at the site of bite, progressing within days to cerebral dysfunction, anxiety, confusion, agitation. As the disease progresses, the person may experience delirium, abnormal behavior, hallucinations and insomnia.

The acute period of disease typically ends after 2 to 10 days. Once clinical signs appear, the disease is nearly always fatal, and treatment is typically supportive.

Whenever bitten by any animal, wash for 10 full minutes with antibacterial soap (chlorhexidine) and seek medical care.  Disease prevention includes injection of human immune globulin (antibodies) and a round of injections with rabies vaccine.  Once a person begins to exhibit signs of the disease though, survival is rare. Less than 10 documented cases of human survival from clinical rabies have ever been reported.

Additionally, any animal bitten or scratched by either a wild, carnivorous mammal or a bat that is not available for testing should be regarded as having been exposed to rabies. Small mammals such as squirrels, rats, mice, hamsters, guinea pigs, gerbils, chipmunks, rabbits and hares are almost never found to be infected with rabies and have not been known to cause rabies among humans in the United States. Woodchucks or groundhogs however, are the only rodents that may be frequently submitted to state health department because of a suspicion of rabies

Rabies is a preventable viral disease of mammals most often transmitted in wild animals like raccoons, skunks, bats, and foxes.

Still, vaccinate or conﬁrm titers are high to assure pet’s immunity. Unfortunately, more adverse side-eﬀects occur from this vaccine than others, so be vigilant and consider all options to help boost your pet’s health. Do not give this vaccine at the same time your dog receives other vaccinations (space them out by 2-4 weeks) and look for vaccines without mercury and other harmful preservatives. Learn more by visiting www.rabieschallengefund.org to get legislation passed so that too frequent vaccinations will no longer be required in order to legally license dogs in your community.

Watch my VLOG on this topic:  https://youtu.be/D3Mnkq8bOxE 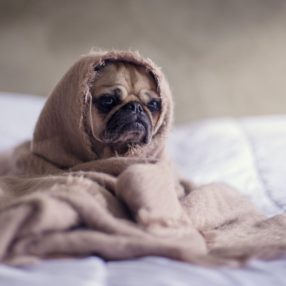 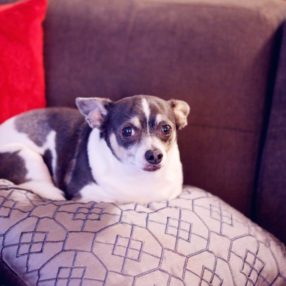 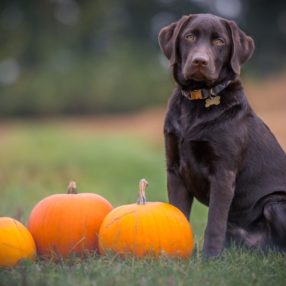 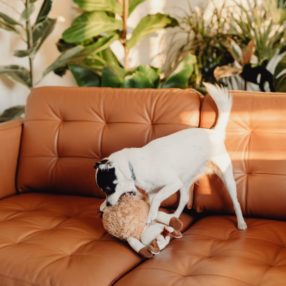 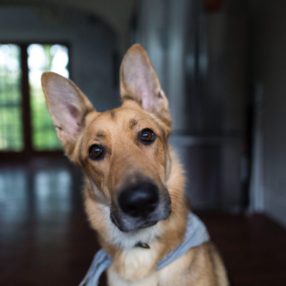